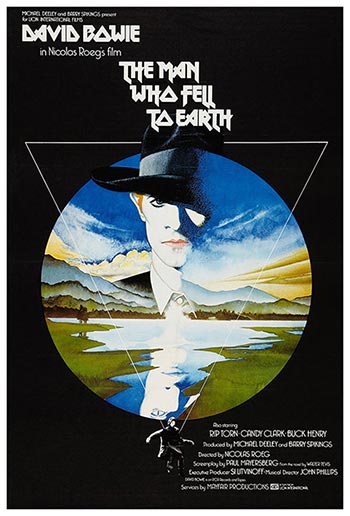 Thomas Jerome Newton is a humanoid alien who comes to Earth to get water for his dying planet. He starts a high technology company to get the billions of dollars he needs to build a return spacecraft, and meets Mary-Lou, a girl who falls in love with him. He does not count on the greed and ruthlessness of business here on Earth, however.

The Man Who Fell To Earth is one of the few sci-fi films that can justifiably call itself brilliant. But what makes it so brilliant, you ask? It’s certainly not the story, which is merely about an alien coming to earth in order to save his dying planet. The performances are excellent, but actors alone cannot make a film brilliant. Perhaps what makes The Man Who Fell To Earth brilliant is the thing that causes people to despise it: it has no plot. That’s right. It’s alot like a David Lynch movie; there are bizzare characters, bizzare dialogue, and bizzare situations, but barely any trace of a followable plot. The film manages to carry a thin story with almost no plot whatsoever and be consistently interesting and entertaining throughout. On top of that, it’s all stunningly photographed. There is quite a bit of sex in this movie, but the sex is done so stylistically we hardly notice how pornographic it is. For instance, in one scene near the end of the film, Bowie wields a pistol loaded with blanks like a phallus. The scene than erupts into a bizzare sex scene filled with flashing strobe lights, full frontal shots of Bowie, and the gun firing randomly off. The Man Who Fell To Earth is essential viewing (unless of course movies that are hard to follow or a naked David Bowie aren’t your thing).