The Married Couple of the Year Two (1971) Jean-Paul Rappeneau 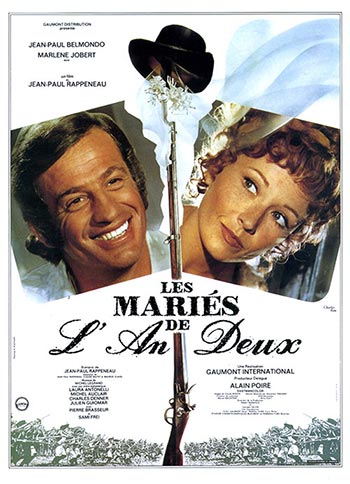 After his escape to America in the year 1787 Nicolas Phillibert wants to marry a rich American heiress. In his homeland France he is still married however to the pretty Charlotte. In order to obtain the divorce, he must return therefore to France. In confusions of the french revolution he soon gets between Royalisten and republicans. After numerous bold adventures he finds his life-merry wife as bride of the best sword fighter of the Bourbonen.

Great adventures in the tone of comedy, particularly accentuated by the strong and turbulent relationship between Nicolas and Charlotte which is light and adventurous and well embodied on the screen by the couple and Jean Paul Belmondo Marlene Jobert. The distribution of this film is noteworthy in view of the many talented and famous actors present: Charles Denner, Patrick Dewaere, Pierre Brasseur, George Beller, Sami Frey, Julien Guiomar, Paul Crauchet, Guibet Henry, Jacques Legras, Jean Pierre Marielle, Sim, Michel Auclair, Maurice Barrier, Laura Antonelli … A French cast worthy of the greatest productions.

Indeed, it is a great production, as evidenced by a lot of action scenes; by, most of the time, authentic natural sets, by a lot of great period costumes for the large number of extras. The final battle is a perfect illustration of the means of production. This battle may also seem too widely developed on the screen relative to its own importance in the history of the characters, but it allows us to immerse well, to better accommodate with the clever, strong, short and very nice epilogue. She also serves as a spectacular finale to the film that may have some lengths and appears to be longer than it actually is. Lengths are very easily digested when the whole scenario took place on the screen.

Adventure, Comedy, technical talents and a special mention for the intelligent use of history make this film “les mariés de l’an deux” a very good film.