The Return of Ringo (1965) Duccio Tessari 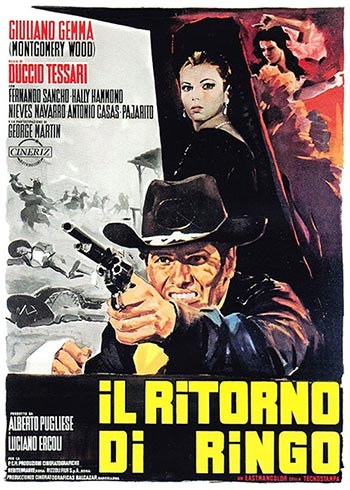 Once again billed as Montgomery Wood, Giuliano Gemma plays a civil war soldier who returns to his family land to find his family decimated, his property taken over by a family of Mexican bandits and his fiancee about to marry the Mexican gangster behind all this. Bent on revenge, he goes undercover disguised as a Mexican and discovers he has a daughter!

Duccio Tessari’s RETURN OF RINGO is one of the great unseen spaghetti westerns churned out by the Italians after the unexpected success of Sergio Leone’s first two “Dollars” films. A sprawling, high-powered epic tale about a Union soldier returning after the war to find his wife & home usurped by a local pistolero and his band of gunmen. Giuliano Gemma is excellent as always in the role of the suave, cool-headed hero who works up a ruse to pose as a peasant worker to infiltrate the household and fight from the inside to reclaim that which was his.

Ennio Morricone scored a magnificent musical pastiche of themes that is quite different from his usual Leone contributions. Non-fans of the genre will be pleased by the attention to detail in the lavish production, with a high profile supporting cast led by Fernando Sancho, sexy Nieves Navarro and Lorella De Luca as Gemma’s former beloved. He looks odd during his scenes with his hair bleached blond and is unconvincing as a Mexican but Gemma really was one of the great Italian genre leads. His approach is somewhat different than Clint Eastwood, usually playing himself as a gentleman who simply happened to learn how to be an efficient killing machine under the stress of war.

There’s some genuinely amusing and tightly choreographed gunplay in the ending showdown, and the screenplay by Tessari, Fernando di Leo and Alfonso Balcázar is surprisingly humanistic for this kind of fare. Highly recommended.