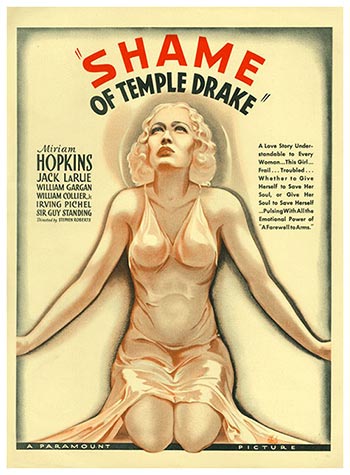 Temple Drake is a Southern belle who leads men on with her sexuality but usually leaves them wanting. She’s loved by lawyer Stephen Benbow, whom she likes but doesn’t love. While out carousing with one of her beaux, she finds herself stranded with a gang of bootleggers, one of whom, Trigger, rapes her and makes her his sex slave. When another man is accused of a murder Trigger committed, Stephen defends him and sets out to find Trigger. But he isn’t prepared for whom he finds with Trigger, or what she’s become.

The Story of Temple Drake is a 1933 American pre-Code rape and revenge film directed by Stephen Roberts and starring Miriam Hopkins and Jack La Rue. It tells the story of Temple Drake, a reckless woman in the American South who falls into the hands of a brutal gangster and rapist. It was adapted from the highly controversial 1931 novel Sanctuary by William Faulkner. Though some of the more salacious elements of the source novel were not included, the film was still considered so indecent that it helped give rise to the strict enforcement of the Hays Code.