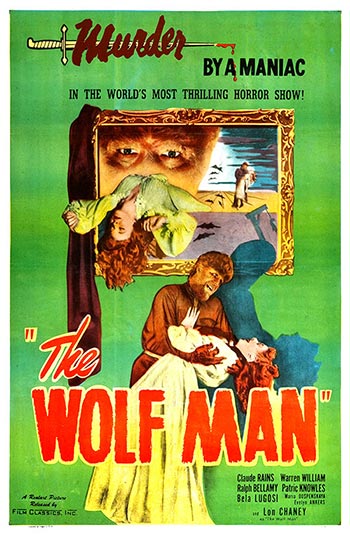 Upon the death of his brother, Larry Talbot returns from America to his ancestral home in Wales. He visits a gypsy camp with village girl Jenny Williams, who is attacked by Bela, a gypsy who has turned into a werewolf. Larry kills the werewolf but is bitten during the fight. Bela’s mother tells him that this will cause him to become a werewolf at each full moon. Larry confesses his plight to his unbelieving father, Sir John, who then joins the villagers in a hunt for the wolf. Larry, transformed by the full moon, heads for the forest and a fateful meeting with both Sir John and Gwen.

Lon Chaney Jr. does an awfully good job transcending the traditional monster out to get everyone with a humane, sympathetic portrait of the titular lycanthrope. This is Universal Studios at its best with a good old-fashioned horror yarn, excellent acting, particularly by supporting cast members Claude Rains, Evelyn Ankers, Bela Lugosi, and the outstanding Maria Ouspenskaya as the old and wise gypsy woman, wonderful sets complete with swirling fog, and special effects that were new and fresh in 1941. This film is fast-paced and deserves its rank as one of the great Universal horror classics.