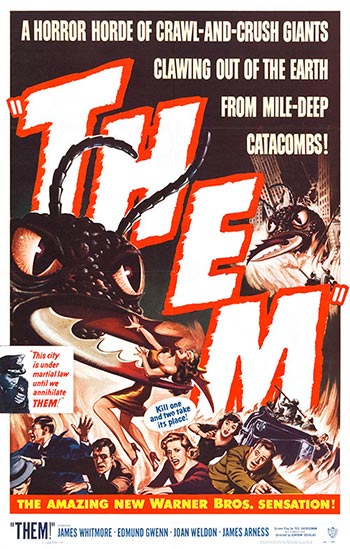 Nuclear tests in the desert result in the growth of gigantic mutant ants who menace cities in the American south-west as a team of investigators and the army search for a way to control their spread in this Cold War-era monster film.

Probably the best of the 50’s mutated insects/animals/humans films. One of the reasons is that the acting is superb. In this film, the entire cast is absolutely top notch, led by James Whitmore as the policeman with a BIG problem. Of course, Edmund Gwenn is terrific as the lead scientist……always delightful in any part, he handles his role with a bit of humor in the midst of death and destruction. Even the smaller parts are handled well. Sandy Descher as the traumatized child is very affecting and is the first to say “Them” in reference to the giant ants. The special effects are not bad for a 50’s film……. in fact pretty good for a 50’s film. The script is literate and you can almost believe the premise of radiated mutated ants. Regardless of whether you believe it or not, this is a film that everybody who loves 50’s sci fi movies should see. You might develop a fear of ants after this one!!!