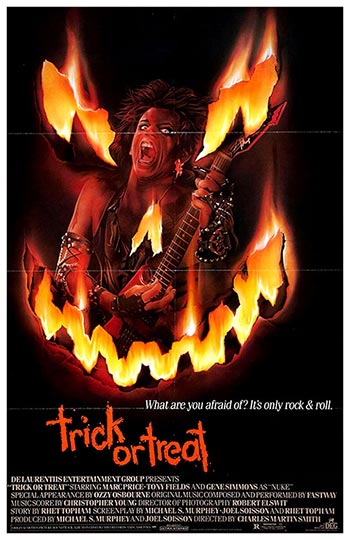 Hard rock idol Sammi Curr burns to death in a hotel fire. His biggest fan, Lakeridge High School student and resident metal head Eddie Weinbauer is devastated by the news and turns to local radio DJ “Nuke” for emotional support. After a heated discussion about the deceased rock star, Nuke presents Eddie with a rare demo record, the last ever recorded by Sammi and the only copy in existence. Overwhelmed by Nuke’s generosity, Eddie accepts the gift without hesitation, unaware of it’s dark role in things to come. After constant humiliation and a near drowning at the hands of school bully Tim Hainy and his sports jock friends, Eddie becomes enraged and vows revenge on all those who have wronged him, much to the dismay of love interest, Leslie and best friend, Roger. Alone in his room with feelings of rage and retribution racing through his mind, Eddie places the new record…

Trick or Treat combines horror, comedy and Heavy Metal into an entertaining brew. The handling of Eddie’s humiliation at the hands of the hated jocks and his feelings of isolation is well done, while the scene where the recently resurrected Sammi Curr lays siege to the high school Halloween party is reminiscent of “Carrie”.

Throw in cameos from rock legends Gene Simmons and Ozzy Osbourne and a rocking soundtrack from the band “Fastway “and you have a great slice of 80’s cinema!

As rock-hating TV evangelist Reverend Aaron Gilstrom (Ozzy Osbourne) says after the credits roll “This could kick you off into being an absolute pervert”.