Valley of the Dragons (1961) Edward Bernds 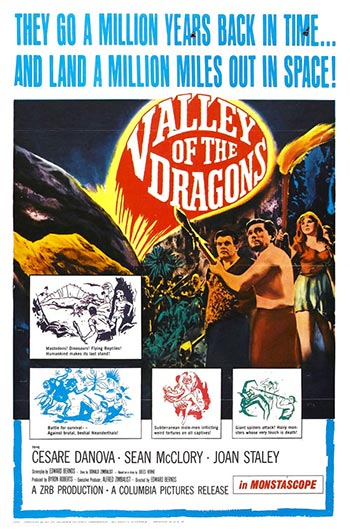 Based very loosely on a story by Jules Verne, two men, about to undertake a duel, are thrust into an alternate universe. Finding themselves the only “civilized” men in a world of cavemen and savage beasts, the two realize they’ll have to put aside their differences to help each other survive in this strange new world. Cesare Danova and Sean McClory star, with Joan Staley (The Ghost and Mr. Chicken) and Danielle De Metz (The Magic Sword) starring as the love interests.

Directed by Edward Bernds (Queen of Outer Space and The Three Stooges In Orbit), who also wrote the screenplay. Bernds likely saw the comic possibilities in the implausible Verne story, just one of the many reasons that this bizarre adventure is a one-of-a-kind fun-filled science fiction film without the earnest, straight-forward tone of many of its era’s sci-fi classics.