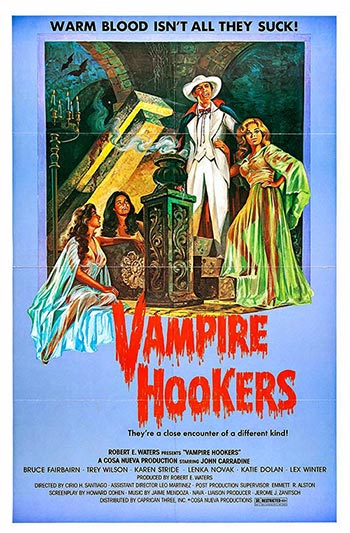 A rather insane horror film from the Philippines has a couple sailors on leave when they notice a buddy taken to a cemetery by a hooker. When their buddy doesn’t show back up they go out looking for him and discover a vampire pimp (John Carradine) and his three vampire hookers.

This is a really stupid film that is pure exploitation but if you enjoy bad movies then there’s enough here to keep you going. If the thought of a fair to poor movie scares you then it’s best you stay away from this one. The movie is incredibly stupid on so many levels and that includes dialogue like “Coffins are for being laid to rest…not for being laid”. You also have exploitation legend Vic Diaz playing a loser who wants to be a vampire but can’t help farting inside his coffin, which keeps him from being able to sleep at night.

The performances, as expected, are beyond bad and that includes the three hookers, although thankfully they do get naked. They get naked during a nearly ten-minute orgy scene, which has to be one of the worst ones ever filmed. Then we have Carradine who is once again playing a vampire and here we get to see him with fake plastic fangs. He appears to be having fun at the age of 72 so you can’t blame him. The Philippines have delivered all sorts of strange exploitation films over the past few decades but none of nutty as this one here. It’s certainly trash but just sit back and try to laugh. And don’t forget to stay tuned during the closing credits to here the song “Vampire Hookers (They Suck More Than Blood)”.