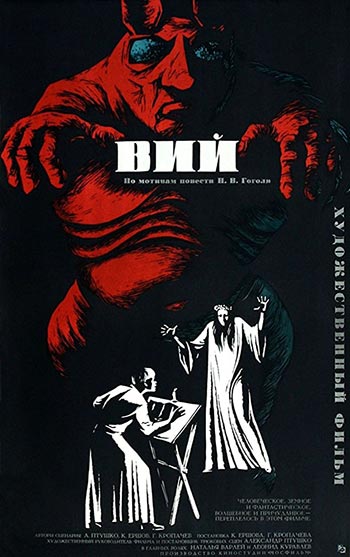 This Russian film adaptation of Nikolai Gogol’s story was for a long time the only horror film made in the Soviet Union. Khoma (Leonid Kuravlev), a young novice, travels across the countryside and stays for a night in a barn that belongs to an ugly old woman.

When she attacks him at night and takes him for a broom ride, the scared novice fatally wounds her, and before she dies, she turns into a beautiful young noblewoman (Natalya Varley). The latter leaves a will, according to which Khoma should pray for her for three nights in the chapel until her body is buried. At night, the witch rises from the coffin and tries to catch Khoma. She flies around but she can’t reach him or see him because he stays inside the circle that he has drawn around himself. During the third and last night, the witch makes the last attempt to scare him out of the circle, and she calls all sorts of ugly creatures to help her… Gogol wrote several stories based on Ukrainian folklore, many of them dealing with the Devil and the supernatural.