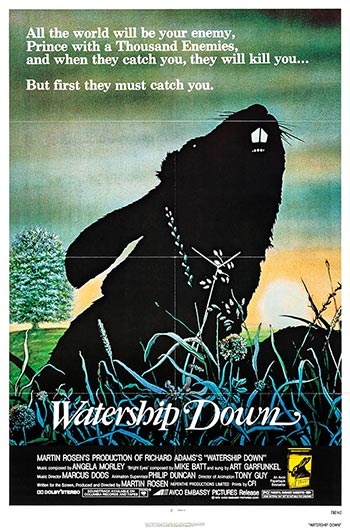 A group of rabbits flee their doomed warren and face many dangers to find and protect their new home. Based upon Richard Adam’s novel of the same title, this animated feature delves into the surprisingly violent world of a warren of rabbits as they seek to establish a new colony free of tyranny and human intervention. Frightening and bloody in some scenes.

British animated film about a bunch of rabbits leaving their old warren (which one psychic rabbit can tell is going to be destroyed) and searching for a new one. The movie recounts their adventures searching for one.

It may sound like a movie ideal for little kids–but it really isn’t. It’s an excellent adaptation of Richard Adams book which was written more for teenagers and adults. It’s an ecological tale of how men are destroying the earth and (inadvertently it seems) killing innocent wildlife. It’s also a very interesting story about how a group of rabbits survive on their own.