Wild Sex of the Children of the Night (1982) Levi Salgado 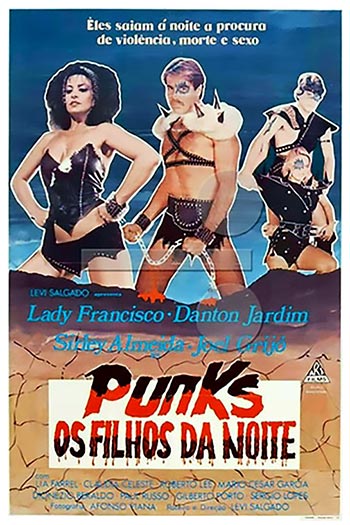 In the future, two rival punk gangs fight for the same territory. The film depicts punk life in the near feature, when everybody is going to wear fancy clothing and make-up, and be aggressive as a form of survival. Action takes place mostly during the nights, and people gather in groups usually having some big name as leader, such as punk singers. After groups are formed, they start fighting against each other, trying to secure leadership. Main groups are the Lady’s, the Baby’s, the Drago’s and the Ratos (Rats). They mix sex with violence, sometimes with subsequent death. One of the few dissonant voices is Gatão (Big Cat), kind of barbarian super-hero who faces punk tribes alone, standing for old-fashioned values such as honor, honesty, loyalty and care for defenceless people. Kind of “The Warriors” (1979) wannabe.