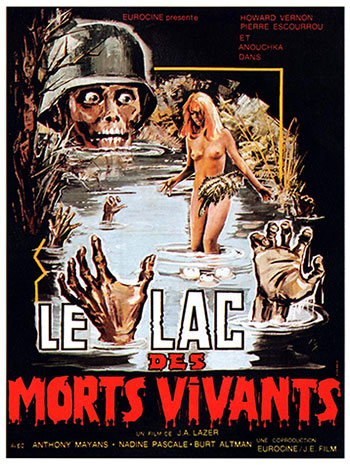 In a small village, somewhere in France, German soldiers, killed and thrown into the lake by the Resistance during WW II, come back.

Zombie Lake (1981) was another sleazy and cheesy production from Europe’s biggest sleaze and fetish film company Eurocine. They produced a lot of films for Jesus Franco and Jean Rollin. They specialized in Nun exploitation and other forms of taboo adult cinema. This film, although not as creative as the aforementioned genres still has some sleazy charm.

The film is about a squad of German soldiers who were murdered by a mob of angry french partisans during World War II. Years later, their corpses are re-animated and have come back to take revenge on those who murdered them so many years ago. Will the dead come back and finally get their revenge? What dark secret does one of the townspeople carry with them? Can they stop? You’ll have to find out for yourself when you watch Zombie Lake!!!! Filled with a lot of nudity and cheesy gore. It’s exploitative fare and doesn’t pretend to be anything else.