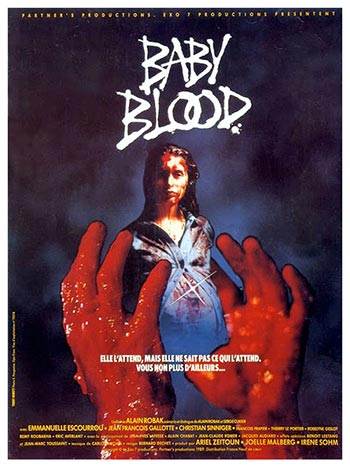 A cruel circus owner beats and abuses his pregnant wife. One day the circus receives a leopard newly captured in Africa, but the animal soon dies. However, an evil creature that was inside the leopard bursts out of the animal’s body, burrows into the wife’s body and takes over her fetus. It soon starts demanding blood, and the woman goes searching for victims for her new “baby”.

“Baby Blood” is a superb overlooked French horror movie that deserves a much wider audience. The beautiful and voluptuous Emmanuelle Escourrou stars as a circus performer who is impregnated by some kind of mutant monster. On the run, her unborn “child” begins to speak to her and demands blood – lots of it. Reluctantly she complies by murdering men she encounters. Eventually she develops a strange love/hate relationship with the monster within her.

This is a brilliantly entertaining variation on the killer baby theme (see “The Unborn” and “It’s Alive”), with plenty of gore and nudity from the stunning Escourrou. “Baby Blood” is one of the most underrated horror movies of the last twenty years.