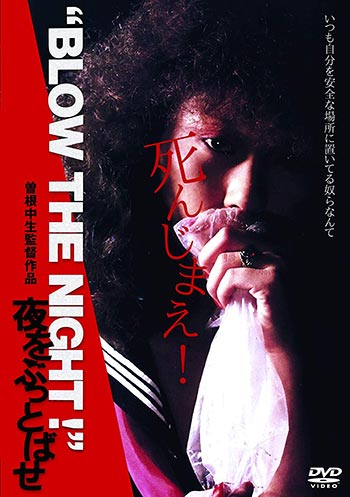 “BLOW THE NIGHT!” Let’s Spend the Night Together is a 1983 Japanese docu-drama shot on 16mm film starring actual Yanki gang members as many of the main characters. The basic story is split into two parts…

It begins with fifteen-year-old troublemaker Namie Takada moving from the suburbs of Tokyo to a regional city in rural Japan and coming up against the local Yanki gang at her new school. After some initial suspicion from both sides, she finds her niche – and her shaved eyebrows, long Sukeban skirt, red permed hair and general bad ass attitude win her acceptance with the local contingent of young Bosozoku bikers…

This is contrasted with the latter half of the film which takes place over a 24 hour period, as things quickly escalate from general name calling, teenage boredom and rebellion in the classroom into an out-an-out riot where the students proceed to beat their teachers and the police attempt to lock down the school.