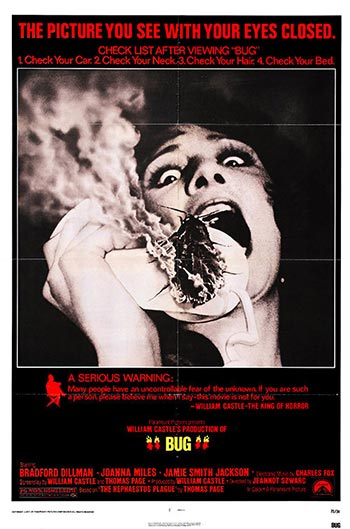 An earthquake releases a strain of mutant cockroaches with the ability to start fires, which proceed to cause destructive chaos in a small town. The studies carried out by scientist James Parmiter, however, reveal an intent with much more far-reaching consequences.

BUG benefits greatly from the intense and nervously twitchy central performance of BRADFORD DILLMAN as the scientist who goes off the deep end after his wife is set ablaze by the title critters. The insect photography is well-done and the soundtrack whenever the bugs make an appearance is a prototypically 70’s art-house exploitation hybrid–a series of scratches and electronic pops–but it becomes unnervingly effective. It is a genuinely creepy movie, one which manages to conjure up a disturbing atmosphere of heat and paranoia and eventually crumbling insanity. Worth a look.