From Beyond the Grave (1974) Kevin Connor 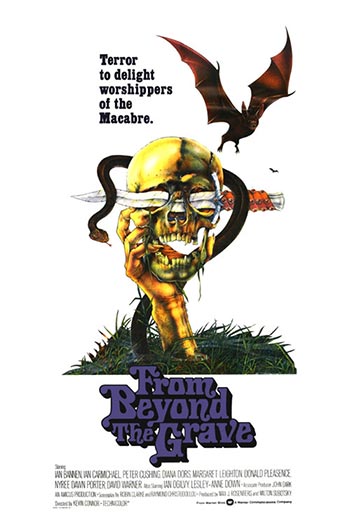 Anthology film from Amicus adapted from four short stories by R. Chetwynd-Hayes strung together about an antique dealer who owns a shop called Temptations Ltd. and the fate that befalls his customers who try to cheat him. Stories include “The Gate Crasher” with David Warner who frees an evil entity from an antique mirror, “An Act of Kindness” featuring Donald Pleasence, “The Elemental”, and “The Door”.

From the plethora of Horror films from the Amicus and Hammer studios in the late 1960’s and early 70s, this is one that stands out above many of the others. The opening sequence with the camera moving through the mist graveyard is a masterful piece of horror film. Each of the stories is built up very well with an excellent element of tension in each. If you want to see a great example of the British horror film genre, this is the place to start.