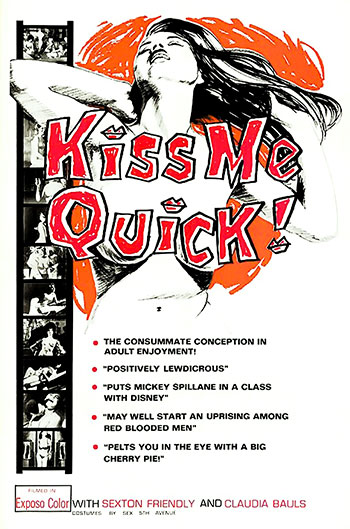 Sterilox, asexual ambassador from a distant planet, comes down to earth in search of feminine breeding stock. A mad scientist treats the alien to dancing sex robots.

Kiss Me Quick is a masterpiece of its genre (nudie cutie), accepting of course that the genre has fairly low standards. The film has humor, which separates it from some of its competitors. It also has attractive girls, some especially so in the mid-sixties sort of way. Somehow the women in those days managed to look attractive and voluptuous without looking slutty. Harry Novak, the Producer, said that most of the women were recruited from the Classic Cat, which was a strip club in Los Angeles. In those days strippers didn’t have tattoos or body piercings or look like they could kick your butt. This film was made during the ear of monster popularity. The Addams Family and the Munsters were big hits on television, so of course we get monsters as the male characters in the film.