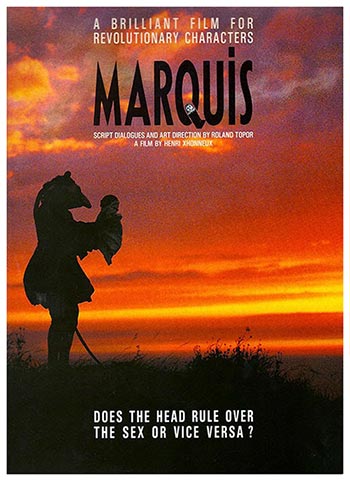 Ribald, violent, surreal and satirical, Marquis offers a unique take on the events leading up to the French revolution as seen from the perspective of the notorious Marquis de Sade.

Presented in metaphorical terms, each of the actors’ faces are covered by an animal mask that more or less represents their character. Their voices were dubbed in later.

The tale opens while the dog-faced Marquis de Sade serves jail time. When not working on his writing, he engages in long conversations with Colin his penis, a meter long member endowed with a human face. When Colin is not whining about his need for stimulation and his particular interest in the rat-like bisexual jailer Ambert and espousing his impulsive philosophies, he is criticizing the Marquis’ work, some of which is illustrated via claymation. The Marquis is in trouble for allegedly raping and impregnating the cow-faced Justine, who was really victimized by the king, something the camel-headed priest Don Pompero, and the cocky Gaetan De Preaubois, try to keep secret. Meanwhile, the revolutionaries prepare to stage a coup and depose the king.