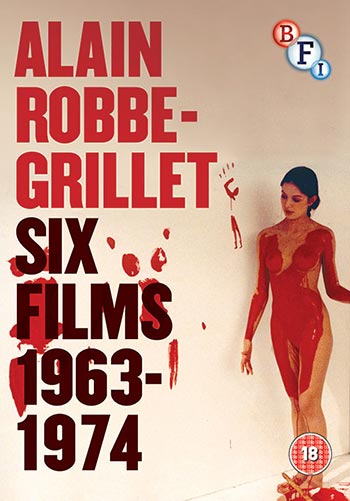 Long before there was any notion of “remix culture,” famed French writer Alain Robbe-Grillet created this radical re-imagining of his own feature EDEN AND AFTER (which no doubt to most viewers had already been quite radical enough). In the 1970 original, perverse games amongst student types at a Mondrian-inspired cafe are kicked up a notch when a mysterious older stranger (Pierre Zimmer) appears to offer a hallucinatory “fear powder.”

A young woman (Catherine Jourdan) who ingests it finds herself trapped in a bizarro world of sex, violence and surrealism, first at a maze-like factory, then in Tunisia where youths are subjected to S&M tortures in striking all-white settings. This enigmatic narrative and its outré content are pushed several degrees closer to total madness in N. TOOK THE DICE, which scrambles an already ambiguous chronology to the point of freeform collage. A voiceover narrator provides the only semblance of logic in a mash-up that incorporates not just footage from EDEN but outtakes and new sequences as well. Originally made for French television and never given a commercial release, the film is an arresting pure sensory experience that one is advised not to even try making conventional “sense” of.

This film is evidently a reworking of Robbe-Grillet’s previous film “L’Éden et après”, using alternate takes and re-editing that has the order of scenes to be governed by ‘a throw of the dice’ (shown in new footage).