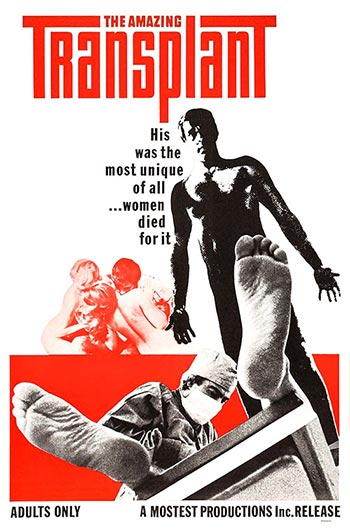 No, PERCY (1971) wasn’t the first penis transplant movie. The sultana of sleaze, Doris Wishman (one of the only women directing exploitation movies at the time), directed and wrote this oddball softcore horror drama. Arthur Baron (Juan Fernandez) can’t get it up, so he seeks the aid of a doctor who transplants his recently deceased friend’s member onto him. Soon the operation goes sour and he finds himself in hiding after he kills his girlfriend. For some reason gold earrings set him off! In flashbacks, he seduces, rapes and/or murders other women. One is played by porn star Kim Pope. Another is a fat lesbian, and she gets sick after they do it and hovers over the toilet as Wishman’s never-stable camera tilts down for a nice shot of the ladies zitty rear-end!

There’s plenty here to entertain cult movie and Wishman fans (including lots of her trademark bizarre camera placements and tracking shots) and at times hints of (gasp!) substance rear their ugly head before being immediately trampled over by the next ridiculous or implausible plot move, terrible performance of laughable line of dialogue.