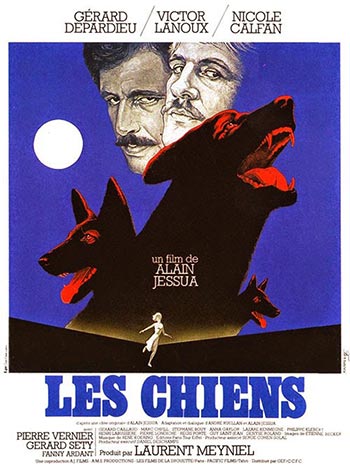 After several inhabitants of a new city were bitten by dogs, a young doctor tries to stop to the climb of violence.

There ‘s nothing supernatural in “les chiens” ,but Alain Jessua’s treatment gives us the strange feeling we are sometimes watching a sci-fi, fantasy and horror movie. The atmosphere seems irrational,and even the “good” heroine turns into an almost disturbing character. She was the victim of a rape and she bought a dog to protect her. In the town, a lot of people do the same, in spite of the mayor’s opposition. Depardieu portrays the owner of kennels where he trains the future dog-handlers (we’ve got to call them like this because it’s not longer the nice little pets). A movie about insecurity,like all Alain Jessua’s movies of the seventies ,it was too ahead of its time for its own good.

According to Alain Jessua, the director, Gerad Depardieu accepted to play in this film only because he was himself attacked by dogs a couple of weeks before and decided to somewhere exorcise his fear of dogs with this movie playing.