Third After the Sun (1972) Gueorgui Stoyanov 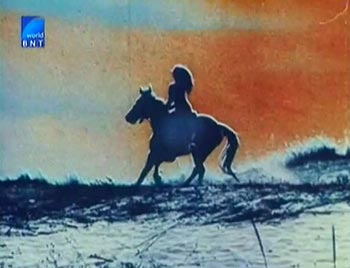 In prehistoric times the crew of an alien spaceship land on Earth. The commanders decide to lay the foundation for a new civilization, in which they will imprint of their own civilization, which is dying out. Through surgical intervention on apes, the aliens program the future spiritual evolution of Earth. During the operation, the patient wakes up abruptly. Discovering himself as a person, he calls himself Eden. He shocks by what is happening to him and he refuses to participate in such experiment. Eden is tranquilized and this time the volume of knowledge imprinted in his brain stays in his sub-consciousness. The ape is released. During takeoff, the ship crashes and the crew die. The only thing left on Earth is Eden and the hope that he will spawn the human civilization.

In the second novel, “The Stranger”, the writer, author of criminal novels meets an envoy of an alien civilization. The writer asks him to heal his terminally ill friend. The miracle takes place, but on the way back from the sanatorium, the two earthmen die in a car crash. The third novel is “My first day”. Distant future. Len – an ambassador of a distant world visits the Earth. Eden tells him the story of his wife Lena. As a history student Lena was sent back in the 5th century. The girl fell in love with the son of a leader of the tribe – Bayan. The prejudice by his fellow tribesmen dooms their love. Lena returns to her time, while the lovesick Bayan went mad. Len understands that the millennium jump he prepared will destroy the existence of humanity. He decides not to interfere and has a single wish – his first day on this planet to belong to him