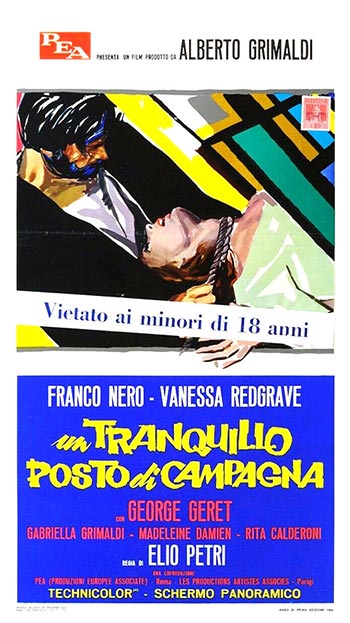 A popular painter, plagued by nightmares that he and his lover/sales agent are engaging in bizarre, ritualistic, sadistic sexual acts, seeks to escape the city and rent a house in the country.

A hypnotic Italian thriller about a very imaginative young painter (Nero). He’s popular, energetic, so are his paintings. His matron and lover (Redgrave) is going to do everything to make him do his thing. She’s willing to create an environment in which he’d be able to churn out more work that’s hot and expensive. He decides he needs a quiet place in the country to live and paint in. But as they find such a place, he gets distracted big time… This film is brilliantly crafted. Full of striking and dynamic visuals created by clever camera-work. Always logical, insane, but never “cheesy”, “Quiet Place…” at times reminds of Fulci’s “Lucertola con la Pelle di Donna” and Verhoeven’s “De Vierde Man”. Franco Nero’s a dead ringer to Kurt Cobain in this one. He’s so great in this role that it’s almost as if he isn’t acting. Highly recommended to fans of Bunuel, Verhoeven, Argento, etc.