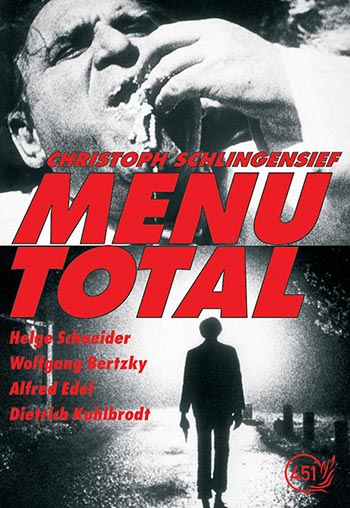 An abused young man imagines he is Adolf Hitler as he dreams of revenge.

Meat, Your Parents: A morbidly wicked parade of ghosts of the past, packed with black humour!

Jolly life on the pick-nick meadow in Mühlheim/ Ruhr. The parents have fumbled out their old Nazi uniforms. It adds even more fun to the polonaise. Mama gives the starting signal for an extraordinary military parade. Her son Joe gets waked up in the middle of the night. But will he understand what they are planning to do with him? Will he be able to resist the brutal fight of the systems? Will the sperm exchange work out? Will Joe eat the raw human brain? Joe seems lost. His way leads into an abandoned shaft of the Rosendelle mine, where there is a test laboratory. While outside the parents’ steps die away, Joe refuses ingestion, is operated on, but can still escape. The situation is picking up speed …

De Pen kills Cuca, the stinking, meets his assistant in Hemer/ Sauerland and receives Martha, the wheelchair-bound virgin. While Evi fries the cock and gets it stuffed in the mouth by Wolf, Joe gets away and reaches the house in Mühlheim/ Speldorf built in Frisian style, which is occupied by Evi now. Again and again the zombies greet the bawling Führer. The situation seems tangled-up. Will Dr. De Pen clear it and be able to kill his son or find death himself? And what is “Menu Total”? Cuca found the Menu worth puking. … but the Kid- and Meat generation likes their meat well-seasoned …

Starring Helge Schneider, whose soundtrack counts among the best of German Cool Jazz – and New German Cinema icon Alfred Edel puking all over the place! Booed at the Berlinale 1986! Wim Wenders left after 10 mins!