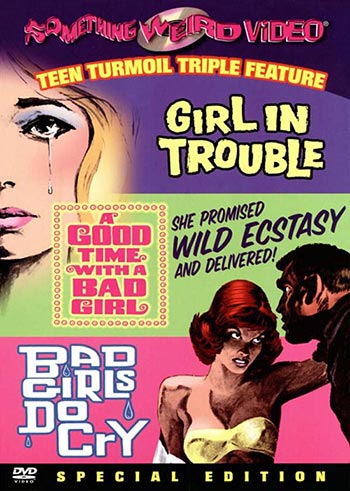 A naive young girl goes to a model agency, where she is molested, shot up with drugs and forced to become a prostitute.

SID MELTON was an amiable character actor who’s best remembered as both Uncle Charlie on TV’s Donny Thomas Show and Alf on Green Acres. (He also popped up in dozens of Lippert Pictures, and played the loveable sergeant gored by a stop-motion dinosaur in the 1952 Lost Continent.) Oddly enough, he also directed one film, Bad Girls Do Cry, a celluloid crime so-bad-it’s…well, not exactly good, but as morbidly fascinating as anything by Phil Tucker or George Weiss.

Statuesque burlesque stripper MISTY AYERS (Tijuana After Midnight) — who strips to her undies within the film’s first two minutes – plays Sally Down, a naive good-girl who comes to Los Angeles looking for work, gets a job slinging hash, and is swooped upon by Nick Moran, “a cheap trigger-happy hood” who likes what he sees: “Ever think of modeling? All you gotta do is look pretty!” Trouble is, Nick’s idea of “modeling” is to send her to a whorehouse at 6242 June Street where he immediately jumps her: “You’re here, make the best of it!” Not happy with this abrupt change in careers, Sally balks but Nick persuades her by knocking her out cold and giving her a shot from a hypodermic. Two weeks later, we’re told she’s the most popular girl in the house!

But when All-American Tommy Cole arrives to ride the Sally express (“You know, this is the first time I’ve ever been to a place like this!”), the big jerk falls for her. And when “the two-bit Romeo” encourages Sally to eventually make a break for it, their great escape is foiled by Nick. So Tommy goes to the police – “If s about a girl! She’s in bad trouble! Like white slavery!” – which only results in Nick gunning for him and Tommy forced to go into hiding…behind a telephone pole.

Filmed in 1954 but not released until eleven year later – where it looked even more outdated when sold as an “Adults Only” title in the Sixties sexploitation market — Bad Girls Do Cry never fails to astonish. Shot silent (probably in 16mm and blown up to 35), and awash in library music more appropriate to a cartoon or jovial industrial, the few moments that are dubbed are done Doris-Wishman style: with the camera carefully pointed at the person not speaking (including the immortal line, “Was that [kiss] for love or were you giving me a sobriety test?”).

But what makes Sid Melton’s movie a real mind-melter is that it’s all punctuated with shtick. Yup, this potentially grim story of a blonde bombshell forced into prostitution is continuously intercut – and undercut – by bizarre comic interludes that only succeed in giving it all a strange surrealistic edge. For instance, a gal knits Nick a pouch to keep his gun handle warm! Another gal knocks a customer out, picks his pocket, and gets her hand caught in a mousetrap! And while poor Sally is engaged in a fierce catfight on the floor, the house madame confuses milk for booze, crosses her eyes, and does a spit-take right at the camera!