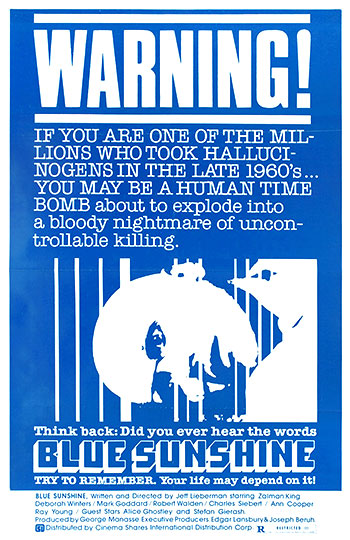 At a party, someone goes insane and murders three women. Falsely accused of the brutal killings, Jerry is on the run. More bizarre killings continue with alarming frequency all over town. Trying to clear his name, Jerry discovers the shocking truth…people are losing their hair and turning into violent psychopaths and the connection may be some LSD all the murderers took a decade before.

This surprisingly intriguing horror film has people turning into bald,blue-skinned killers after dropping contaminated LSD ten years before. “Blue Sunshine” is more fondly remembered for it’s bald, thirty-something, ex-hippie murderers who are easily the most bizarre descendants of the living dead yet to reach the silver screen. This film is not easy to categorize: it’s a horror film mixed with drug movie and also features paranoid urban legends and bizarre conspiracy theories. The title of this movie is taken from the name of a bad batch of 60s acid that seems to have some rather unfortunate long-term side effects. The film is badly lit and there are some dull spots, but “Blue Sunshine” is a must-see for experimental cinema enthusiasts.