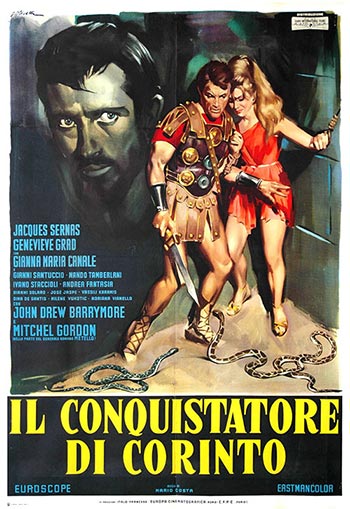 Protests break out in Corinth against Roman domination, injuring Caius Vinicius, a Roman centurion. He’s rescued by Hebe — daughter of the anti-Roman governor, Critolaus — who’s being unsuccessfully wooed by the governor’s second-in-command, the villainous Diaeus. Smitten, Hebe sends the handsome Roman to recuperate at the home of Callicrates, a political moderate. Artemide, wife of Callicrates, also falls for Caius Vinicus but when he spurns her, she has him arrested and imprisoned. Hebe then agrees to marry Diaeus if he will spare the Roman’s life but Caius Vinicius is soon freed by Callicrates and his allies, just as a Roman army arrives to battle Corinthian forces.