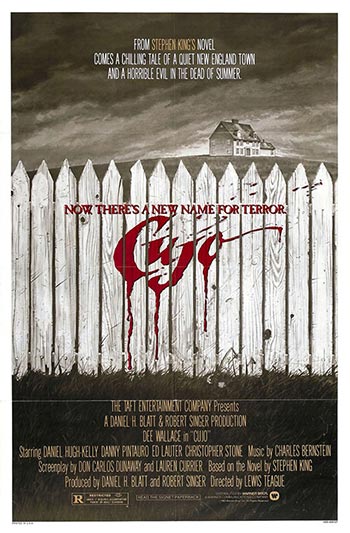 Donna Trenton is a frustrated suburban housewife whose life is a turmoil after her husband learns about her having an affair. Brett Camber is a young boy whose only companion is a Saint-Bernard named “Cujo”, who in turn is bitten by a rabid bat. Whilst Vic, Donna’s husband is away on business, and thinking over his marital troubles, Donna and her 5-year-old son Tad take her Pinto to Brett Cambers’ dad’s car shop… the car fails, and “Cujo” is very, very sick…

Stephen King-based thriller is a sweat-inducing shocker that ranks among the most intense King adaptations. Cujo remains one of the more memorable Stephen King novels because it’s a tale of such merciless suspense and in the hands of director Lewis Teague much of that same horror transcends well into this film. This film benefits greatly from a powerful story with some well fleshed-out characters, it’s much more than just another ‘animal attacks’ movie. Teague’s direction is also very tight and helps to build an unnerving tension through out this film.

The atmosphere is very heated, the look of the movie very gritty, and the danger feels all the more real! The camera work is also excellent and makes this film feel truly claustrophobic! It builds to a finale that is heart-stopping. The music score is harrowing and the filming locations are good.

Cast-wise the film is quite strong too. The great Dee Wallace delivers an emotionally powerful performance as a mother desperate to protect her child and survive herself. Young Danny Pintauro is great as Wallace’s horrified child. The supporting cast is good too, as are the numerous St. Bernard’s that play our vicious title character.

Cujo is a top-notch suspense film that never loses its edge. A must-see, and not just for King fans.