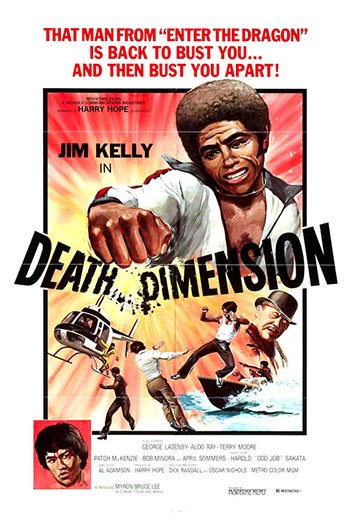 The Pig has a plan to eradicate some people with a freeze bomb that instantly freezes people to death. It is up to Detective Ash to stop him and protect the woman with the secret to the ice bomb embedded in a microdot under the skin of her forehead.

Yes, this movie is one of the many children of the Bruce Lee era, but honestly, it is one of the most entertaining. Everything from the sets to the story reek of cheapness, but it’s all good. Jim Kelly has great fighting skill and the mere presence of Bond alumni George Lazenby and Harold Sakata is enough for the film to warrant a look. The story — concerning a fiendish plot to “freeze-bomb” the world — is absurd, but the elements that populate it — kung-fu, hot chicks, and grunting henchmen — combined with great locales and a goofy soundtrack, make it a doozy. If you expect Enter the Dragon, you won’t get it with Death Dimension a.k.a Kill Factor, but this movie is still some great fun. Look for the senseless closing frame; it seals the deal.