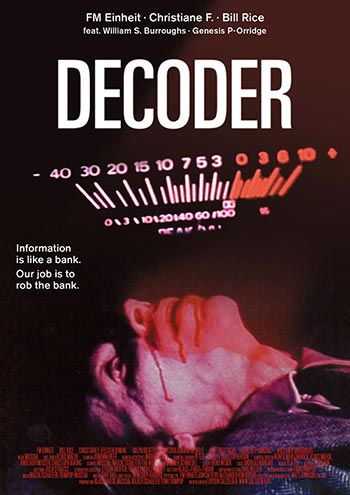 Pop performer F.M. Einheit discovers that different sonic frequencies and induce different patterns of behaviour in listeners, first in his own studio but later in the local “H-Burger” restaurant where the passive muzak appears to be wiping people’s emotions.

The government headquarters responsible for this are represented by a huge ‘fascist’ building full of winding spools. Bill Rice, the government official who works there meanwhile goes on a journey of sexual discovery in the local red-light district.

Einheit meanwhile, after several arguments with his girlfriend (played by former child prostitute Christianne F.) and dream sequences featuring William S. Burroughs finds himself amongst underground rebels led by Genesis P. Orridge (the avant garde pop performer in groups like Psychic T.V. and Throbbing Gristle, himself a fan of Burroughs) who explains to F.M. about how the government have been ‘controlling’ the public through muzak. After this revelation he steals the tape from H-Burger and remixes it so that it induces panic, the rebel army replace the tapes in all the burger bars which are strangely now shown as Burger King and McDonald’s rather than the fictional H-Burger.