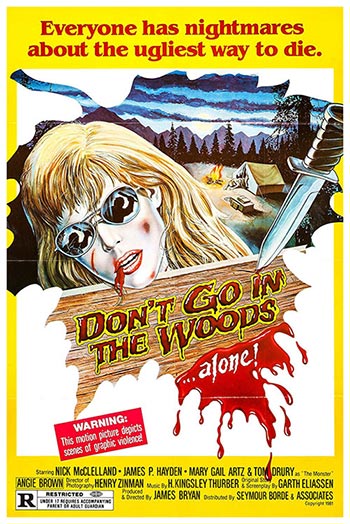 Four backpackers decide to take a hike in the mountains of Utah. But within the woods lurks a killer. But who…or what…is it? The lazy local sheriff blames bears. But the escalating body count seems to point to a human killer. Ignoring the warning signs, our campers remain lost in the woods…alone…awaiting their fate.

This little low-budget wilderness killer flick is best known as one of the cheapest and most unintentionally funny entries in the genre. There’s no denying that this is a tremendously flawed movie – it’s mainly a series of goofy hikers and campers being killed by an even goofier villain. The acting is shabby, the gore is crude, and the ‘tension’ music score sounds like someone banging their head on a synthesizer. But as poorly executed as the movie is it’s certainly not boring!