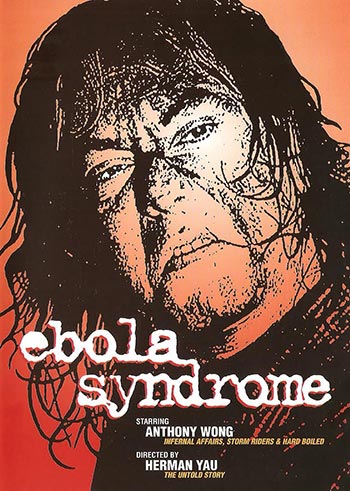 Hong Kong 1986: A restaurant employee murders his boss and mutilates his wife, he escapes to South Africa where he rapes a Zulu-girl, who is infected with the ebola virus. In the restaurant where he now works he murders his boss and the bosses wife after raping her. He chops them up and makes them into hamburgers, which he sells in the restaurant, spreading the ebola virus. When the police come on his trail he moves back to Hong Kong and an ebola epidemic starts there.

This flick derives much of its grasping force from what has to be, if not the most explicit, at least somewhat the most sickening gore ever.

Some scenes are rather innovative : decapitation through the use of a ping-pong table, Kai blowing his load in a steak, corpses being chopped up into hamburger meat with a saw, eyes chewed out of a living head and lots of ebola-related bodily fluids.

Ebola syndrome would not be the same without the psychological profile of its main character.If we were given an insight on Kais childhood, it is likely to be a miserable one, full of abuse and rejection. Thus would explain his disturbed sexual attitude (he does not seem to be able to perform without constant oral stimulation) and his loser nature. Let’s face it, most of his aggression originates from a lack of self-esteem, for which he tends to overcompensate once he disposes of financial powers and/or the opportunity to deploy physical force. It makes for a violent person, but not a threatening one, compared to Hannibal Lecter or the maniac from Maniac. Kai is, in a way, a personification of the virus, which searches for power and immortality through the devastation of other life forms, not realizing his actions will eventually lead to his own extinction.

Together, the gore and Wong hold together a remarkable modern piece of exploitation, with an honesty that most of its contemporaries do not dare to show, but which also demands the right mood, otherwise it feels cheap. In either case, see a schrink if this turns you on.