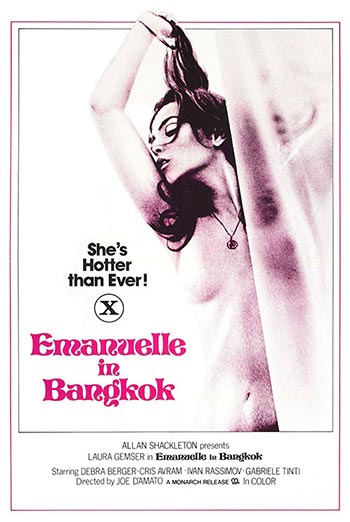 Journalist Emanuelle travels to the Orient to interview a close relative of a King, but comes too close to uncovering official secrets for the state’s liking. Her hotel room is ransacked and her passport stolen, leaving her stranded and at the mercy of a brutal gang of rapists, employed by the government. Her only hope of escape are her powers of seduction.

This is the first “Black Emanuelle” film directed by Joe D’Amato and it actually resembles the first “Black Emanuelle” more than any of the more notorious and depraved films in series which D’Amato later directed. The movie doesn’t have much of a plot, and more of it takes place in Casablanca than in Bangkok or the Orient, so both the English and Italian titles are pretty inaccurate. For the record, Emanuelle has sex with an archaeologist (played by Gemser’s real-life husband Gabrielle Tinti), a female Thai masseuse, a male Thai bellboy, some swinging American Republicans (Ivan Rassimov and the lovely Ely Galeani), the entire (strangely all-European) contingent of the Thai king’s bodyguards, a Thai customs official (after her passport is stolen), the Republican wife again in an airplane bathroom, the archaeologist and his new fiancée, the fiancée again along with a black dancer and an entire horde of horse-back-riding Arabs, and finally the lesbian daughter of the American consul in Casablanca (Debra Berger).