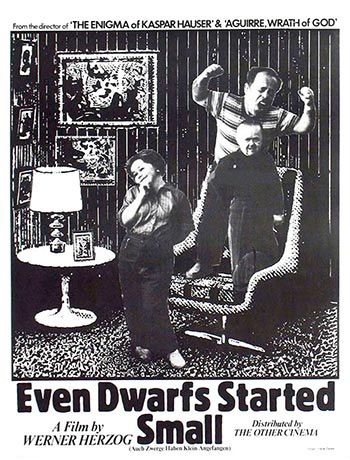 The film is set in a dismal mental institution, wherein dwell several midgets, dwarfs and other “oddities.” Sick of being tormented and exploited by the so-called normal people of the world, the inmates stage a coup, taking over the asylum and utterly reversing the status quo (Herzog’s apparent attempt to draw parallels between the events on screen and such real-life upheavals as Vietnam).

As in his other films, the director imbues his misshapen characters with a sort of regal grandeur, as if to purge the German wartime atrocities against “underdesirables.” Herzog also produced, wrote and provided the musical arrangements for Even Dwarfs Started Small, which was initially released in Germany in 1970 (two years after its completion) as Auch Zwerge haben klein angefagen.