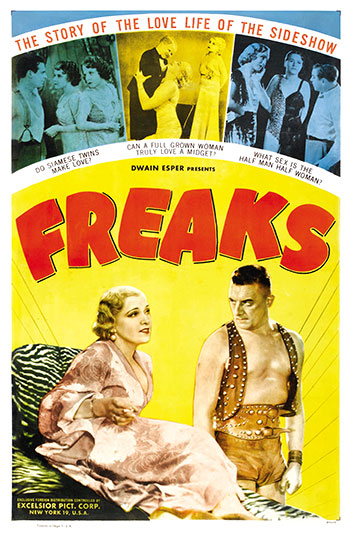 A carnival barker displays a sideshow freak called the Feathered Hen and tells her story. Cleopatra, a trapeze artist with the carnival, is adored by a midget named Hans. Frieda, Hans’ fiancée (also a midget), warns Hans that Cleopatra is only interested in him so that he will give her money. Cleopatra has an affair with Hercules, and when Frieda lets it slip that Hans is to come into an inheritance, Cleopatra and Hercules plan to get the money be having Cleopatra marry Hans. During the wedding reception, Cleopatra, although openly romantic with Hercules, is accepted by the freaks, but is revolted and mocks them. The freaks decide that they no longer need Hercules in their carnival and have a new career for Cleopatra all lined up, and make sure she doesn’t “chicken” out.

`Freaks’ is a totally unique and superb film by Tod Browning. He made himself legendary one year before this came out – in 1931 – with the all-time horror classic `Dracula’. This film, however, is something completely different and it nearly cost Browning his career. Since Browning had the courage to cast actual deformed actors, the words ‘distasteful’ and ‘exploitative’ were automatically attached to his masterpiece and it remained banned in many countries for too many years.