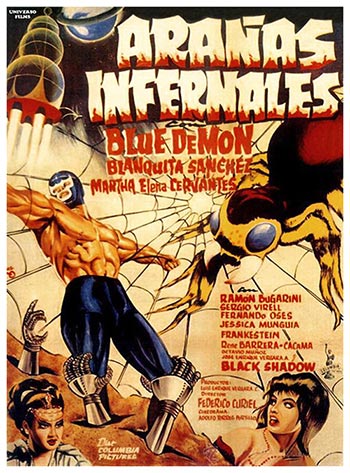 Aliens from the galaxy Arachnea invade Mexico, seeking human brains to feed their queen, a monstrous spider. Aware of Blue Demon’s role as a champion of justice, the Arachneans take human form and try to eliminate him in various ways (including taking him on in the wrestling arena), none of which succeed. After a failed attack on Blue’s pal Hilda, she seeks out the alien’s underground lair and is snared in the queen spider’s web. Hilda’s boyfriend José is kidnapped by the aliens and prepared for brain extraction. Blue Demon must save them both and put an end to the alien’s evil plans on Earth.