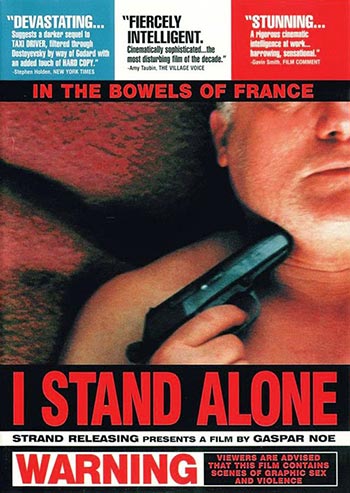 The Butcher (known from Noe’s short film Carne) has done some time in jail after beating up the guy who tried to seduce his teenage mentally-handicapped daughter. Now he wants to start a new life. He leaves his daughter in an institution and moves to Lille suburbs with his mistress. She promised him a new butcher shop. She lied. The butcher decides to go back to Paris and find his daughter.

This is a confronting and profoundly disturbing movie, mainly because of it’s realism and believability. While it certainly features some scenes of extreme violence, and one scene of explicit pornography, most of what makes it so powerful and horrible is the almost non-stop venomous monologues of “The Butcher”. Director Gaspar Noe self consciously apes Scorsese’s ‘Taxi Driver’ in several scenes, but this movie is a truly original vision. Highly recommended for movie buffs with strong stomachs, and the ability to deal with dark and troubling material.