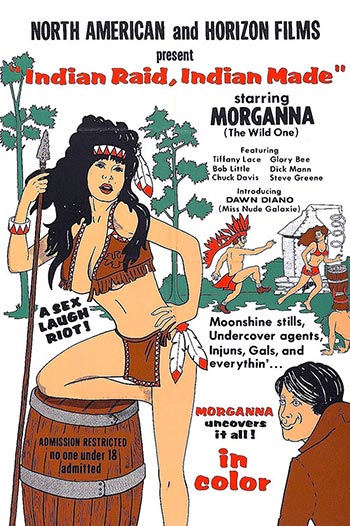 “Boy, this is weird!” exclaims Morganna (“The Wild One!”)-the top-heavy gal later fames as “The Kissing Bandit,” interrupting major league baseball games by running onto the playing field and kissing the players! When it comes to weird, the gal knew whereof she spoke.

This particular piece of weirdness-from Harry Novak and the warped mind of director Bob Favorite (RIVERBOAT MAMA)-opens with the credits painted onto the shapely torso of a vixen sponging herself down in a shower.

A skin flick that opens so aptly knows what it’s about: smut jokes, jiggling ta-ta’s, smiling beavers, and tons o’ buns. When secret agent Harold (Chuck Davis) gets the call to infiltrate and end a moonshine operation at the Pleasant Point Resort, open season is declared on common sense and subtlety. A car trunk slams down on his hand; he gets trapped in a phone booth choking on the top secret missive he’s instructed to eat; and a radio broadcast of a baseball game offers blow-by-blow commentary on the blowjob he receives in the front seat of his car. All this before Harold even arrives at the Pleasant Point Resort. Once there, he’s engaged in one roll in the hay after another, by every chick in the flick. Indeed, the only thing agent Harold seems to be infiltrating is the abundant pudenda. But don’t worry. Another agent is on the scene. Disguised as Little Dove, an Indian maiden, she convinces the two idiot brothers who operate the illegal still that they are the last of “the Jerkaloopies.””We’re injuns!” they cry. “We’s real Jerkaloopies!” They sure are. The two “Jerkaloopies” then attack their own lodge and tie up Harold and his women. But before any scalps are lifted, Morganna, who’s a guest at the resort, comes to the rescue by performing “The Devil Dance,” featuring the heaviest hooters this side of Hades. Then she takes her act on the road, driving off in her convertible with the two Jerkaloopies in the back seat shooting toy arrows at the camera.