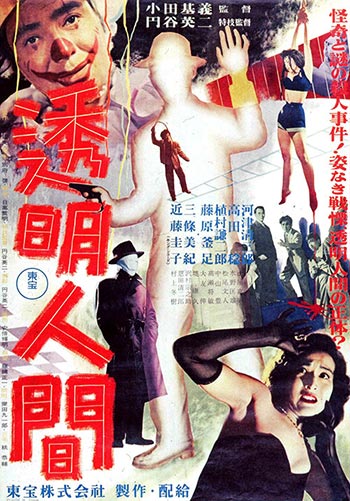 A car strikes an unseen object; blood spreads from an invisible source which becomes visible as the bleeding man dies. He carries with him a suicide note dedicated to his only friend, who is also an invisible man. An eager young reporter tracks down Takemitsu Nanjo, a war veteran who makes his living visibly, painting his face like a clown’s and carrying advertising signs. His favorite neighbor is a little blind girl whose mother is running afoul of local gangsters. The gangsters have been terrorizing the city as “the invisible gang,” wrapping themselves up in scarves and trenchcoats so as to be visible to their victims, even though they are supposed to be invisible underneath. Once they discover Nanjo, who is defending his only friends, they beat him and leave him for dead.