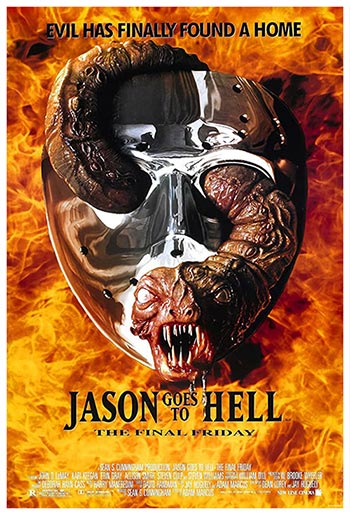 The secret of Jason’s evil is revealed. It is up to the last remaining descendant of the Voorhees family to stop Jason before he becomes immortal and unstoppable. This is the final (?) battle to end Jason’s reign of terror forever.

Jason Goes To Hell is an underrated flick. It is very silly and does mess with Jason’s mythology, but still, the positive aspects are plentiful. The gore in this entry obviously benefited from the bigger budget, with easily some of the best and most gruesome murders in the series. The sexuality and nudity are also kicked up, keeping continuity with the rest of the series. The overall movie is incredibly fun and entertaining, even if it doesn’t exactly fit with the other movies in the series. With it’s gore and excessive campiness, it still holds true to many of the conventions of the series. This is an undeniably goofy, tongue-in-cheek horror film full of a few well-played gambles, some good humour, and features one of the best out-of-left-field endings since the first Sleepaway Camp.