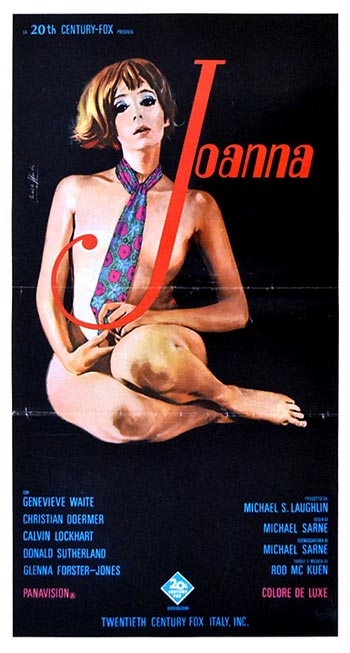 Joanna Sorrin, a whimsical and fanciful country girl, goes to London to follow a fashion design course. She comes into contact with the capital’s young jet set and becomes the mistress of Gordon, the black owner of a night club. Unfortunately her lover happens to kill a man and is sent to jail. As she is pregnant from Gordon, Joanna returns to her parents’home. But the young woman has not yet said her last word. She WILL be back in Swingin’ London !

This film could almost be viewed as the “let’s-get-real” answer to “Guess Who’s Coming to Dinner”, a film that probably still could not get made in the U.S. As a snapshot of “swinging London” in the sixties, “Joanna” has it all. But Donald Sutherland absolutely steals this movie as Lord Peter Sanderson; his strange, wonderful, secular soliloquy on a Moroccan beach at sunset still provokes both goose pimples and tears. South African actress Genevieve Waite, who plays the wide-eyed heroine, was declared persona non grata in her native country after making this film, solely because of her love scenes with Calvin Lockhart (she later emigrated to the U.S. and married John Phillips of the Mamas and the Papas). All in all, a strange, wonderful, campy, mystic trip to the sixties.