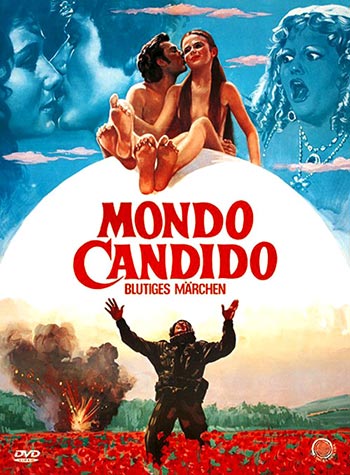 Candide is a nice, innocent young man who is raised in a castle of a noble family in Westphalia during the medieval age. Dr. Pangloss, a teacher of metaphysics and philosophy educates him and tells that he lives in the best of all possible worlds and that any apparent absurdity, misery and conflict are actually all parts of a greater good that mortals cannot perceive. The happy life of Candido changes drastically when he falls in love with the Baron’s daughter Cunegonda and is caught with her. Candide is banned from the castle and starts traveling into a timeless world, searching for his lost love. Candide attempts to stay optimistic as unbelievable horrors unfold in a world full of brutality, war, slavery and sickness…

The makers of this movie base the film on a cynical satire `Candide’ from the French writer Voltaire. Directors Gualtiero Jacopetti and Franco Prosperi are known for their documentaries in which they have already presented the horrors of the world: MONDO CANE (part 1 and 2), AFRICA ADDIO and the very revolting ADDIO ZIO TOM. In comparison with other shockumentaries, all these movies are very well directed, have a racy comment and contain unforgettable images. “Mondo Candido” is a masterpiece. It’s sensational, sometimes shocking but you will see a series of unforgettable images, very beautifully filmed, even though they are cruel, nihilistic and pessimistic. The superb musical score from Riz Ortolani is available now, but it is very difficult to find this exceptional movie.