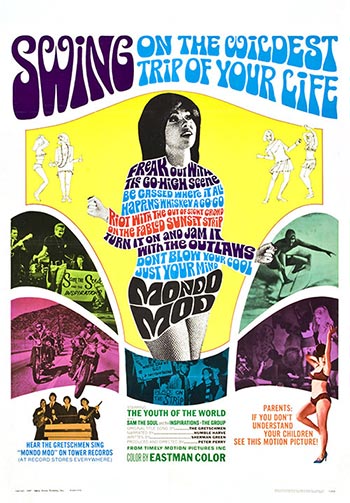 Beginning with the title song, “It’s a Mod Mod World” by the Gretschmen, “Mondo Mod” explores West Hollywood, California’s famous Sunset Strip in 1966. We journey from discotheques to dirt bike competitions, taking in surfing, karate, go-carting, the Hell’s Angels, political protests, pot parties and all the other trappings of the Now Generation. Along the way, we’re treated to priceless footage of Pandora’s Box, Gazzarri’s, the Whisky A Go-Go, the Fifth Estate, and countless other forgotten haunts of “the neon Neverland that the mod set calls home.” Starring, according to the credits, “The Youth of the World,””Mondo Mod” features a pot-smoking, bongo-blasting finale during which these hipsters and flipsters start to strip down. Both the film’s cinematographers became world-famous: Laszlo Kovacks for “Easy Rider,” and Vilmos Szigmond for “Close Encounters of the Third Kind.”