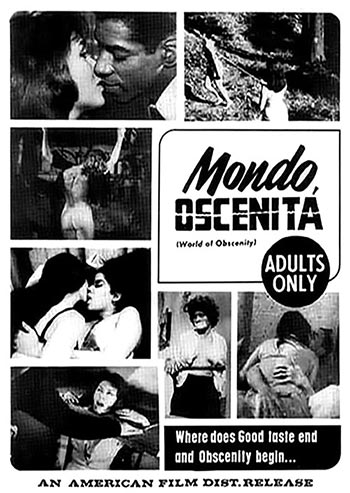 First of all, this is an American film, not an adapted version of an Italian “Mondo” film. It’s a less tedious version of Barry Mahon’s CENSORED, except that while that film had phony scenes all shot for the film (and all of which looked the same!), this one uses footage from various z-grade early 60s exploitation/sleaze films (such as the Olga white slavery and bondage series) and some sleazy Euro films with nudity.

Basically, there is a narration about the history of censorship in film and the evolving tastes of the public, and this lecture is illustrated by all kinds of oddball clips. The true 60s sleaze-film fanatic could probably identify most of the sources. Some of the sequences–like the cowboy film and the swashbuckling film excerpts. If you like to see full-bodied women cavorting in their underwear, or being unconvincingly subjected to mild bondage and kinkiness, you’ll get a rise out of the film. If you are looking for weird, reality-based Mondo footage, you should go elsewhere.There is an Ed Wood connection with this film too, but you’ll have to see it for yourself to see what it is.