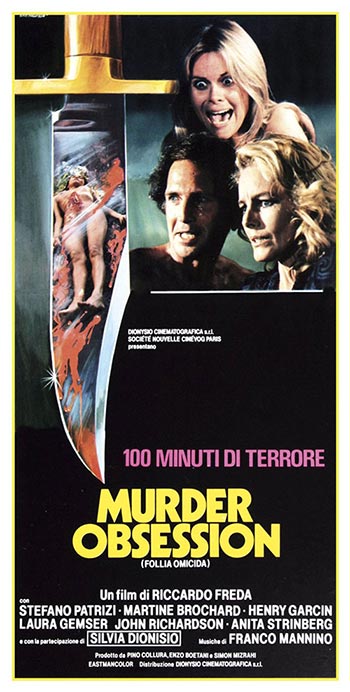 Michael is a successful actor, but he has a scandal in his past: at a tender age he knifed his father to death. He and his girlfriend Deborah go to his mother’s for the weekend, and are joined by the director and others from a recent film project, who are given a rather cool reception by the superstitious housekeeper Oliver. Soon rude things begin happening to some of the guests, and Michael fears a repeat of his nightmare past is in progress.

“Murder Obsession” is perhaps the sleaziest offering of Riccardo Freda to date. It features plenty of nudity provided by Silvia Dionisio, Laura Gemser and Anita Strindberg. This often confusing giallo provides some gruesome killings including death by chainsaw and laughably fake spider attack. There is also a Black Mass, a live chicken beheading, a grubby rape scene and some random gore.