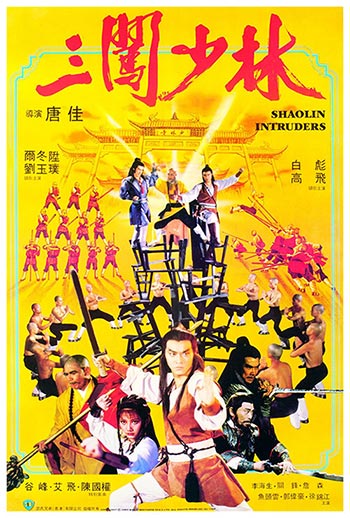 On a routine courier mission, the prestigious Chin Hu Chief was murdered by four mysterious monks. When all evidence pointed to Ching Hua (Liu Yu-po), his friend Lei Hsin (Derek Yee) was determined to clear his name by barging in the Shaolin Temple three times. (hence the Chinese name which means, literally ‘three break Shaolin’).

When Lei thought justice was served for the culprits, he soon realized the table had turned and the monks strike again. What follows is a series of intense pursuits for the ultimate villain!

The film is filled with jaw-dropping action sequences developed by Tang and six leading choreographers of the era. Scenes including the “Blade Array,””Twelve Vajrayana Array,” and the acclaimed “Stool Array” are all lauded as the defining Chinese screen gems for their insane complexity and lightning speed.