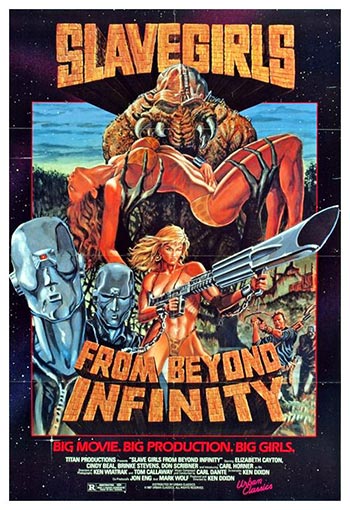 Lovely and resourceful Daria and Tisa escape a space gulag only to crash land on a nearby world where a guy in tight pants named Zed is playing The Most Dangerous Game. Zed turns the girls and another guest loose in his jungle preserve to serve as the prey in a mad hunt. Armed only with knives and their wits, the girls must battle their way accross the jungle to a hidden arms cache before Zed catches and kills them.

This is a b-budget film for sure, but it still succeeds in entertaining. The two slave girls from beyond infinity get stranded on a planet. They encounter a wealthy land-owner, and then the adventures begin.

This movie has scantily-clad women, robotic sidekicks, a hammy villain, campy dialogue, cheesy sets, everything you need for the genre.

The script and the editing work better than most b-budget films. The directing and acting fit the mood. Even the sets and the robots, cheap as they are, stand well compared to other films made at this economic level.

Slave Girls From Beyond Infinity (1987)