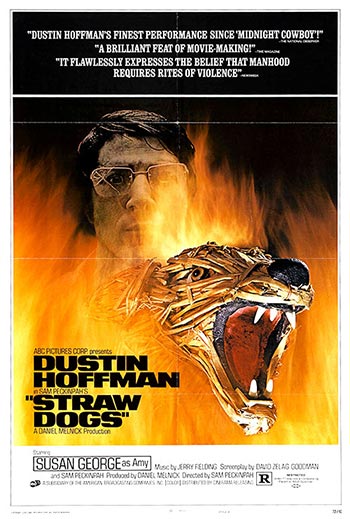 Dustin Hoffman plays a regular American mathematician, who gets into some trouble with local bullies. He is made fun of and then his wife is raped. When they attack his home, he fights back. His outbreak of violence is extreme.

Sam Pecknpah followed his extremely violent and critically acclaimed ‘The Wild Bunch’ with the even more violent ‘Straw Dogs’, which didn’t sit as well with the critics; in fact, ‘Straw Dogs’ was shocking enough to be banned in the UK where it was filmed, although in the US it was released with an X rating. Critics attacked it as being overtly violent and sexual, and entirely missed the message Peckinpah was making. ‘Straw Dogs’ is a film that creates controversy and disagreements, and so it should. It’s easy to create controversy with sex and violence; but many years later that initial shock fades, and the real test is whether or not the film stands the trial of time and still manages to shock and engross. Like ‘A Clockwork Orange’, ‘Straw Dogs’ stands that test. Love it or hate it, it’s hard to deny that it’s an important and influential film, and it’s essential viewing for any film lover.