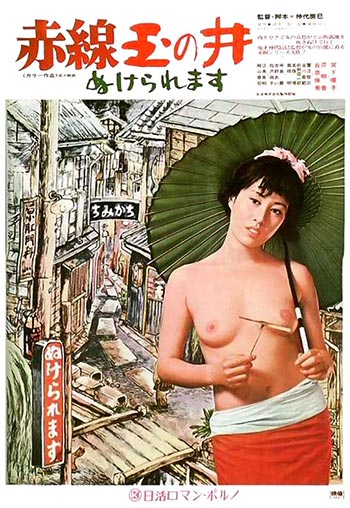 It’s the evening before the day all brothels must be shut-down, according to the new law, in 1958. At the Kofukuya’s (literally, the house that sells happiness), five prostitutes decide to celebrate the day. Erotism, drama, and comedy mix as each hour, and a different event passes, in which all the women’s stories come to the surface.

Enjoyable foray into the sex industry of 1950s Tokyo. Although it is usually classed as erotica, Street of Joy is largely character-driven, with some nice performances. It is a gently reflective, almost nostalgic film, showing the liaisons of prostitutes and clients with compassion. It holds back from judging the central characters and focuses instead on their individual drives and passions. There is a strong sense of family among the girls in the house, and it is through their eyes we view numerous male clients. At times poignant, often amusing, the film depicts a day in the life of the house – from opening to closing time – on the eve of the day brothels are to be outlawed in Japan.

Kumashiro uses the camera cleverly to create a voyeuristic feel to the film, placing the viewer in dark spaces with a keyhole view of the intimate scenes unfolding in the rooms of the brothel. But the soft tones ultimately give the film a feeling of warmth – while it verges at times on darkness, it always returns to the light.